In the past few weeks I’ve made a concerted effort to track down a bottle of Three Ships 10 Year Old Single Malt, after reading good reviews and hearing about it’s recent awards at the IWSC. Scouring local bottle stores proved fruitless, so I turned to the web. After some deft keystrokes I found myself at the Aficionados website. Beautiful design, a nice range of whiskies, and more importantly, they had a bottle of the 10 Year Old in stock at a decent price! I will definitely be buying more whisky from them in the future.

A few clicks later, and my bottle was ordered. Being an impatient fellow, I called their number a day or 2 later to find out when I would be getting my precious whisky and left a message on the voicemail. I’m still waiting for my call to be returned, but the whisky arrived via courier the next morning, so I can’t complain too much! The whisky arrives in a limited edition collector’s tin which commemorates Bartholomew Diaz. Apparently the next two bottles will celebrate Vasco da Gama and Jan van Riebeeck – rounding out the Three Ships. A nice touch. 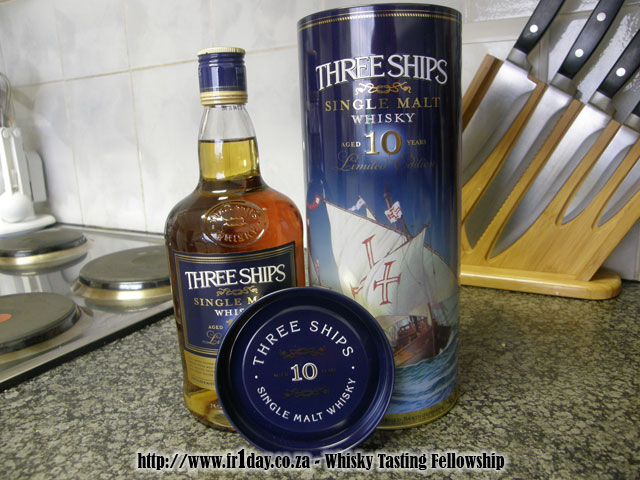 Of course, I couldn’t open the bottle by my lonesome as this called for a celebration, so I organised an impromptu Modderfontein Whisky Club (MWC) meeting at Ryan’s house as my place looks like a warzone (building renovations are not for the faint-hearted!).

At Ryan’s I met the newest member of the MWC, Ryan’s long-time friend Alistair Smith and his lovely wife and daughter. I knew Al was my kind of guy when he hauled out a hefty 1 litre bottle of Caol Ila 12 which we ended up putting a serious dent in. It turns out he’s been over to Scotland and toured the Glenfiddich distillery – lucky bugger! The Caol Ila and a delicious Laphroaig 10 formed the honour guard for this tasting session’s star: the Three Ships 10. 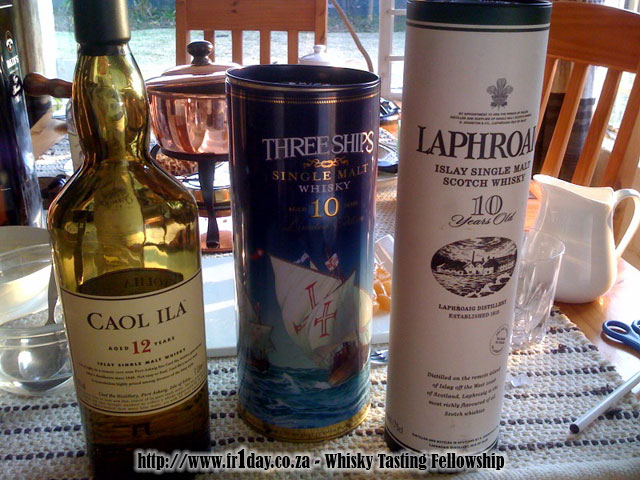 What a star it is too. A limited release bottling, the second release so far, that is well worth acquiring should you see it in your neck of the woods. So what is it like? There are far better tasters out there than me, but here goes: a slightly sweet/cereal taste with a gentle nudge of peat for good measure. The flavour lingers on the palate leaving you with a nice finish. A truly enjoyable dram as our whisky friends in Israel recently found out courtesy of Marc (a.k.a WhiskyBrother). I’m very impressed (and proud) of the whiskies the fine people at the James Sedgwick Distillery are producing. I hope to get down there for a tour someday. 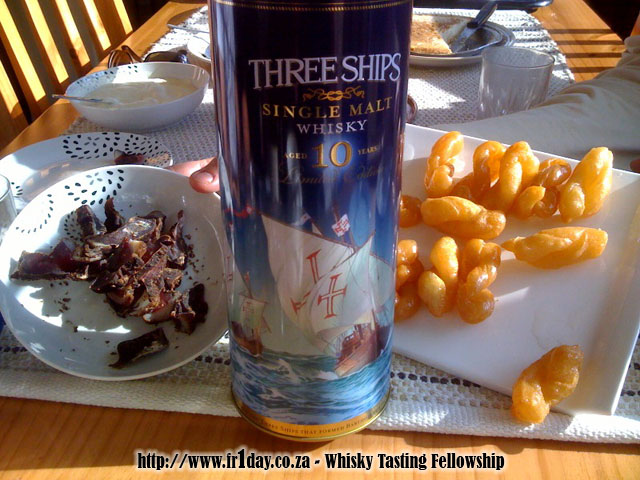 Co-incidentally, we had a table of iconic South African morsels to enjoy alongside the whisky: Biltong (cured and dried meat – about a million times better than American “jerky”), koeksisters (a syrupy, braided pastry – very rich and sweet) and melktert (a.k.a. milktart – a shortcrust pastry base with a creamy/milk custard filling, with a sprinkling of cinnamon on top). Huge props to Ryan for making the biltong himself. It paired really well with the Islay drams.

Another great afternoon with good company and some fine whiskies. Sláinte!