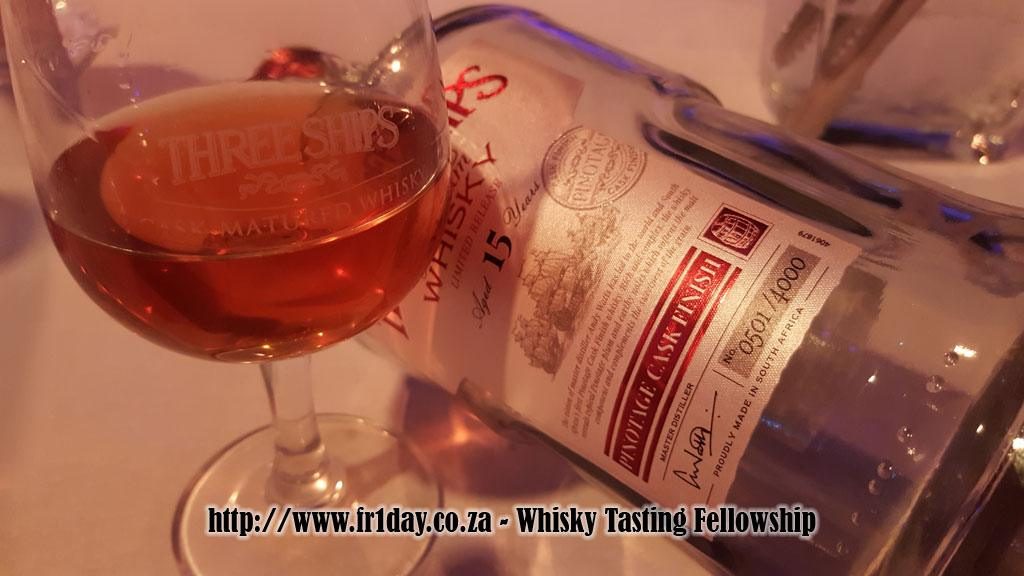 When it comes to my whisky journey, I’ve been blessed to have met many great people in the whisky industry and have tasted more than my fair share of truly exceptional whiskies. And now I can add another one to that list – the second release in The Masters Collection, namely the 15 year old Three Ships Pinotage Cask Finish, made by a man who I have the utmost respect, admiration and love for – Andy Watts.

I was one of the lucky few to attend the launch in Kramerville on the evening of 29 September 2016. It’s an important date and I’ll tell you why.

For many years, hardcore lovers of Three Ships have been hounding Andy to produce a whisky finished in Pinotage casks. A South African grape varietal, it just made sense that a local whisky should use local casks, sourced from a wine farm inside the Distell stable. Of course, Andy was way ahead of us and had this very whisky quietly maturing away in the warehouse.

And it was on a lovely Highveld evening that the world (well, at least a few of us) got to taste this fine dram at a truly auspicious launch.

I’ve always been more interested in what’s in the glass (intrinsics) as opposed to how it is presented and marketed (extrinsics), but I must admit, the marketing and PR team in the form of Follow Ebith Jurgens on Twitter (Distell) and Follow Linda Christensen – Jigsaw PR on Twitter ( Jigsaw PR) put together an exceptional evening. The venue was bathed in pink/purple lighting, the decor all white with some intricate flower arrangements serving as centrepieces. After welcome drinks and canapes, we moved onto the dining area and things got interesting when we were directed to put on headphones and stare at our white place mats! 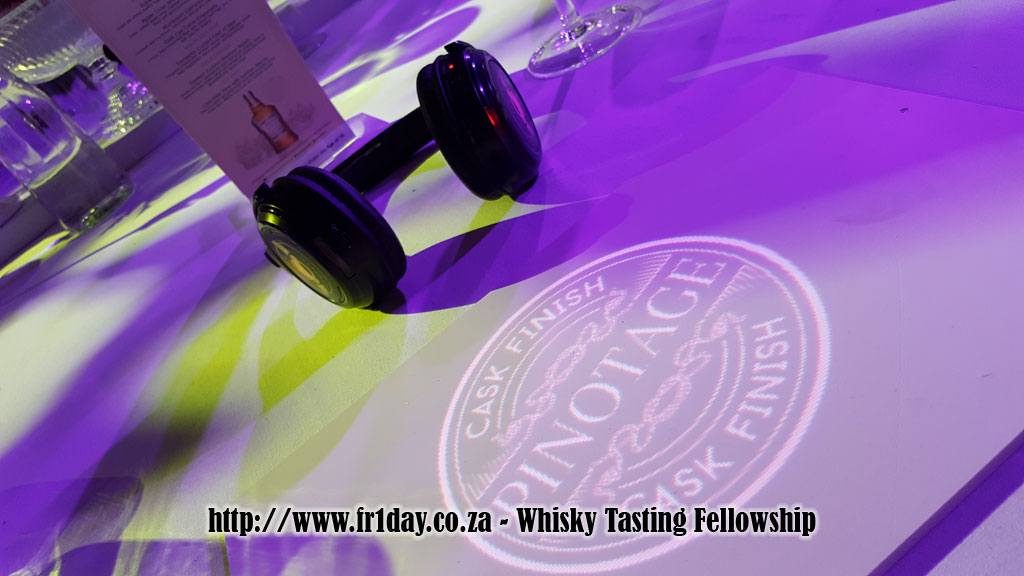 An amusing animated short was projected down onto the table in front of each guest, walking through the production process of the new release, complete with the master distiller (Andy, you looked a tad younger in the footage!) whipping a glass out from behind his ear to taste the final product. Nice trick Andy, show me how that’s done! 😉 I’ll post a link to the video when I get it.

We then moved onto the main show: Andy introducing the whisky to us all and my first taste of the Pinotage Cask Finish!

SIDE NOTE: While this was my first taste of the final product, I did get to taste some work-in-progress samples a couple years back and that got me very excited for what was to come. Even back then I knew this was going to be something special and I am not disappointed! 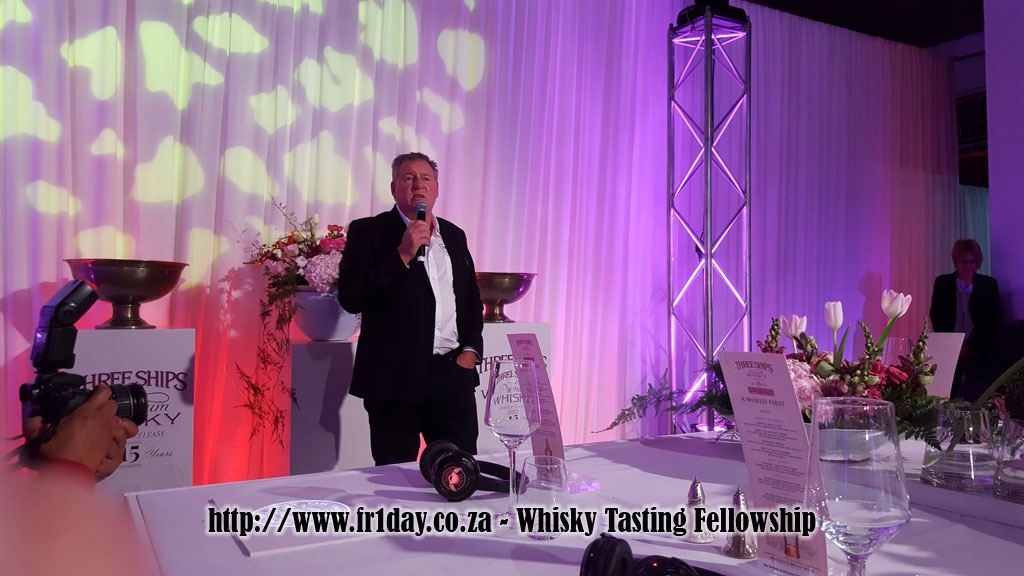 The 15 year old blend consists of single malt and grain whisky in a roughly 35% vs 65% ratio. But here is where it gets interesting….

It’s not simply a case of taking 15 year malt and grain whisky and vatting them together, then finishing them for a few months in Pinotage casks. Andy – the mad genius he his – created the following recipe:

I have to ask – when does a whisky move from being finished in a different set of casks, to be classified as a double-maturation? Five years is a long time for a finish. A bold move by the master distiller that has paid off handsomely.

The resulting whisky was non-chillfiltered and passed through a 5 micron final filtration to let through as much flavour as possible. 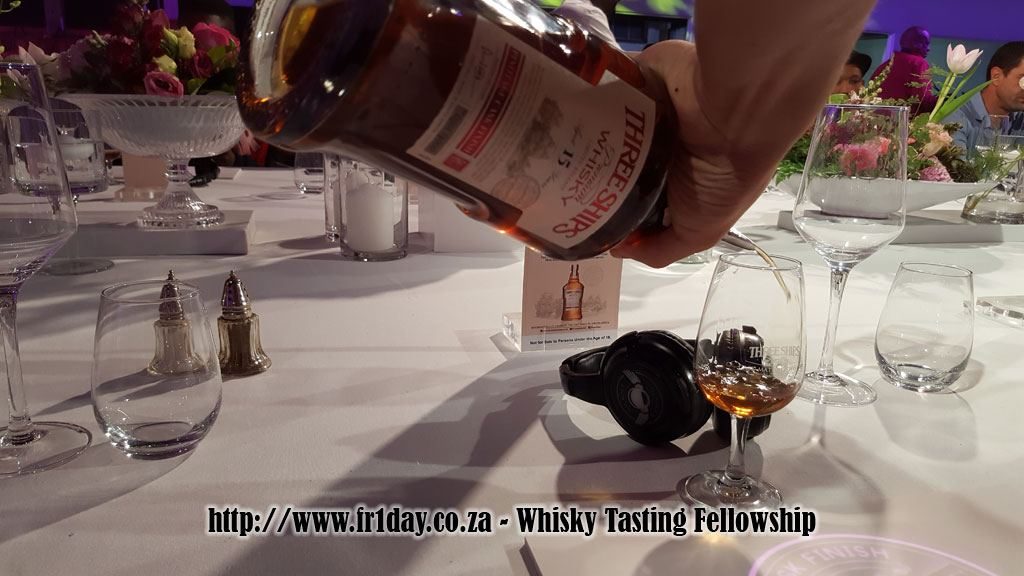 Colour: And what a colour it is!! A beautiful, blushing red. If your glass is full enough, you could be mistaken for drinking a rosé. Andy has gone and delivered extrinsics in the intrinsics by making this whisky pretty to look at! Beautiful at first glance, even better to nose and taste.

Nose: A case of love-at-first-sniff. Lush raspberries, strawberries and plums arrive first, then a delightfully loamy, freshly-turned earth aroma follows. Inhale sharply, and you get raspberry sherbert fizz. Unlike a heavily-sherried whisky, the fruits are fresh and vibrant, not stewed. There is a very, very subtle hint of oak on the periphery. I could literally sit the whole evening, nose buried in the glass, enjoying this whisky with my olfactory sense alone.

Palate: A rich mouth-feel, the grain component delivering a buttery texture. The berries have somehow morphed into other tropical fruits now. Definitely banana, along with a hint of pineapple tartness that tingles on the tongue. I think I’m picking up some European oak (slightly spicier than the American oak), but I could be imagining it? It is very subtle which is surprising – I would have expected that there would be more wood spices from something that has been maturing in oak for 15 years.

With water, sweeter notes come out. Picture the fruits having been dusted with some icing sugar. Actually, it’s almost akin to biting into the booze-and-fruit-infused sponge fingers of a trifle after it has sat there for a while, soaking up the juices. Yum! Those not used to drinking their whiskies at cask strength (or it the 46%+) range may find they get a bit more out of the whisky with a couple of drops of water.

Finish: A crisp, drying finish. The hint of oak picked up on the nose reappears here and makes its presence felt (gently) at the tail-end of the finish.

Product Information: 4000 bottles were produced, but only 3500 will be available to the public, the reserve being held back for promotional events, tastings and to go into the whisky library at the James Sedgwick Distillery.

The whisky is bottled at 46.2% ABV, un-chillfiltered and is its natural colour, just as its maker intended it.

As a parting gift, our gracious hosts gave each attendee a chopping board made out of the oak staves from the Pinotage casks used to mature the very whisky we were there to celebrate. A really nice touch. I think mine will be going on the wall alongside my James Sedgwick Distillery 125th anniversary cheese board, also crafted out of an oak stave.

Where Can You Buy the Three Ships Pinotage Cask Finish Whisky?

The first 500 bottles will be sold at a live online sale at www.themasterscollection.co.za starting at 12pm on Wednesday October 5th, 2016.

Thereafter, the remaining 3000 bottles will be released on October 8th to the general public and will be available on the Distell-owned www.vinoteque.co.za website, at selected retailers – like our good friends WhiskyBrother – as well as at the distillery and from Big Five Duty free stores.

I like that Distell has decided to sell some in Global Travel Retail. It will help to spread the Three Ships brand far and wide, and with it being such a quality whisky, it is sure to get some new converts to South African whisky from around the globe. One bottle at a time, right Andy?

How Much Will the Three Ships Pinotage Cask Finish Cost?

The recommended retail price of this 15 year old is R1500. R100 per year it spent in the cask, quietly maturing. The price tag will prove to be a barrier to entry for some, but even if you can’t buy yourself a bottle, club in with your friends/family and buy a bottle to share. It really is a remarkable dram and you will kick yourself for missing out on this masterpiece. 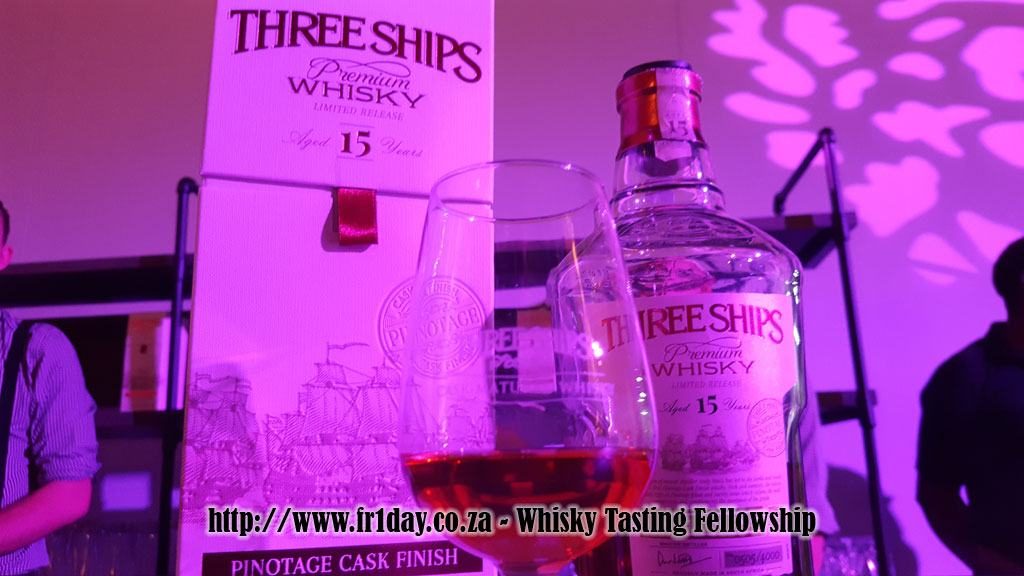 Andy has done it again! Only the second whisky in his illustrious 25 year career as master distiller that bears his name on the bottle, the Pinotage Cask Finish is beautiful. Whiskies like this are going to elevate Three Ships to cult status over the next few years – mark my words.

As the Masters Collection continues to grow, one can see that there are now two markets that Three Ships cater for: their core range delivers great drinking (and award-winning) whiskies, including the new 10 year old vintage series, for the whisky drinker who is just looking for a bang for his/her buck.

And then there are the limited editions that target the avid whisky lover who is looking for something really special. Hopefully Distell’s focus when it comes to sales of these whiskies will remain predominantly local for now to reward the loyal South African fan base that is passionate and proud of the rise of South African whisky under Andy Watts’ creative curatorship.

Andy, keep on doing what you’re doing as we’re loving it!