When I received my invite to a whisky lunch with Checkers LiquorShop, highlighting their new Private Barrel Co single cask range, I must admit I was a bit sceptical. My perception of Checkers ties back to my youth. Growing up in a small town, Checkers was where we went on the weekend to get all the grocery shopping done. It could hardly have been called a glamorous experience. But I have to give Checkers their dues. They have stepped up their game over the last few years, working hard to position themselves squarely in front of high income consumers, highlighted by their extensive cheese and wine offering. 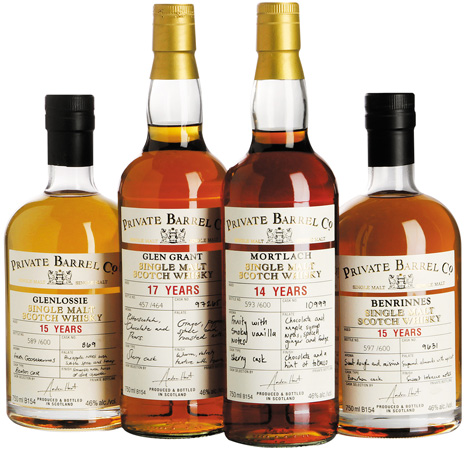 Now they’re testing the waters with single cask whisky under their Private Barrel Co label. Four hand-picked single malt casks, each resulting in no more than 600 individually numbered bottles. An interesting move as this kind of product would on the face of it be better suited to a smaller, more specialised, liquor retailer surely? And I believe that was the initial response from distilleries in Scotland. Uncertain of how their products would be packaged, bottled and marketed by a grocery chain, the distilleries politely declined and Checkers ended up turning to independent bottlers to source their whiskies.

At the end of last year, Checkers Liquor did a soft launch of Private Barrel Co, with single cask bottlings of Highland Park, Bowmore and Mortlach appearing on shelves in their stores without any fuss or hype. And those bottles have sold. Head of Checkers LiquorShop, Joseph Bronn, talked us through their selection process for their second batch, like a proud father showcasing his progeny. The single malts selected for the current release include Mortlach, Glen Grant, Glenlossie and Benrinnes.

I like what they’ve done here. They’ve targeted distilleries that have little or no exposure in SA. Glenlossie and Benrinnes are used mostly in the production of blended whiskies, with a minuscule amount making its way onto the shelves as a single malt. Mortlach doesn’t see the light of day either as a single malt, with the few that have been released all coming from independent bottlers. Glen Grant is available in SA, but not a 17 year old expression. These are definitely whiskies that will pique the interest of the whisky connoisseur looking for something a bit different.

Being a clever chap, I decided to record the presentation given by Jonathan Miles of Whisky Academy and capture my tasting notes too. If I was really clever I would have made sure that the phone’s battery was fully charged. It wasn’t, and all I got was the first 5 minutes, so here’s the official tasting notes with what I can remember of my notes:

All in all Checkers LiquorShop have done well with this addition to their House of Fine Whisky selection. In fact they’ve even impressed the distilleries that were initially reluctant to release any of their casks. So watch our for some single cask Glendronach and BenRiach expressions sourced directly from their respective distilleries appearing under the Private Barrel Co label in early 2014.

In the meantime, there are 4 expressions for you to enjoy which should be on the shelves mid-November, so keep an eye out for them. The range will on show at the Whisky Live Festival in Sandton with whisky guru, Marsh Middleton, present to walk you through the entire Private Barrel Co range. Well worth a visit!